When Cyklop merged its divisions and moved warehouse operations from Nässjö to Burseryd, the company needed to maximise the number of pallet spaces in the existing surface area. The company also needed rational management of different sized pallets and to be able to use the FIFO method in the most effective way possible. From an early stage in the process EAB’s Radioshuttle system proved to be the best alternative and we are happy to have been entrusted with delivering the right solution.

Radioshuttle allowed Cyklop to fully use the capacity of its premises and fit in 80% more pallets than what they would have had space for using traditional pallet racking. Before the move they had traditional stock management, but once Radioshuttle was implemented they transitioned to FIFO, first-in, first-out. This significantly reduced manual handling, thus saving them both space and time in a highly cost-effective manner. Because Radioshuttle is adaptable the system was built according to Cyklops’ most common pallet size, instead of a standard EU pallet, which made the degree of utilisation much higher.

Cyklop AB is a subsidiary of Cyklop International, a global producer and supplier within the packing industry with its head office in Cologne, Germany. The company has more than 750 employees and is represented in over 50 countries. Cyklop develops and produces semi-automated and fully automated systems for the packing industry.

At EAB we are proud to be a supplier to a local producing company. 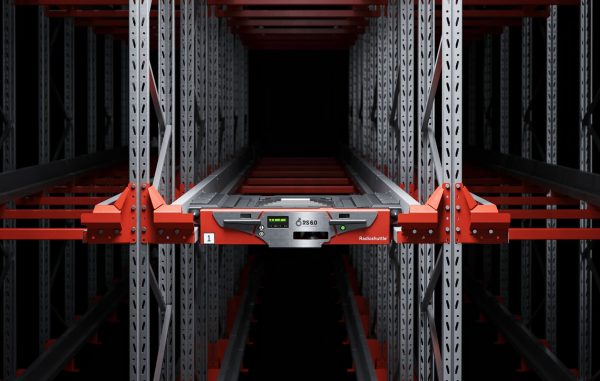 Radioshuttle® is the fully automated pallet management system and may just be EAB’s most appreciated solution. Radioshuttle®, which currently lifts 116,000 pallets around the world, is revolutionary within the fields of warehousing and logistics, which allows for greater efficiency and better usage of the warehouse area than ever before.