Erik worked on-site at different customers and he soon discovered that there was not a local stair railing supplier. A business opportunity, he thought, and so he began producing balustrade and banister rails in the basement of his house.

From the basement to the industrial area

The demand for Erik’s beautiful balustrade and banister rails became much greater than he had anticipated. So, he decided to take a leave of absence from the building firm and in 1957 he founded Erik Anderssons Byggnadssmide, or EAB, short but sweet.

By 1960 he outgrew the basement and decided to build a new factory for EAB, which was 150 m2 in size and located in Östra industriområdet, in Smålandsstenar, of course.

Towards the end of the 1960’s the company had also outgrown the new factory. Extending the building would require steel frames and doors. Someone came up with the idea that they could manufacture both themselves. Things went amazingly well and once the building was complete, EAB could also offer two new product groups: steel buildings and industrial doors.

One more product group was added in 1984: warehouse storage solutions. This meant that EAB could now offer its customers complete warehouse buildings, including interiors. So, all three product areas that EAB is now known for were available from one location.

In 1984, Erik Andersson passed on his life’s work to his children Catrine, Sven-Gunnar and Per-Åke. In 1997, Per-Åke and Sven-Gunnar became sole owners to EAB and since 2017 the third generation own a part of the company.

The most recent factory move took place in 1989. Since then, appropriately enough, our head office, product development department, design, production and warehouse are located under the same roof at Stålgatan in Smålandsstenar.

Over the years, EAB has experienced stable growth, both nationally and internationally. 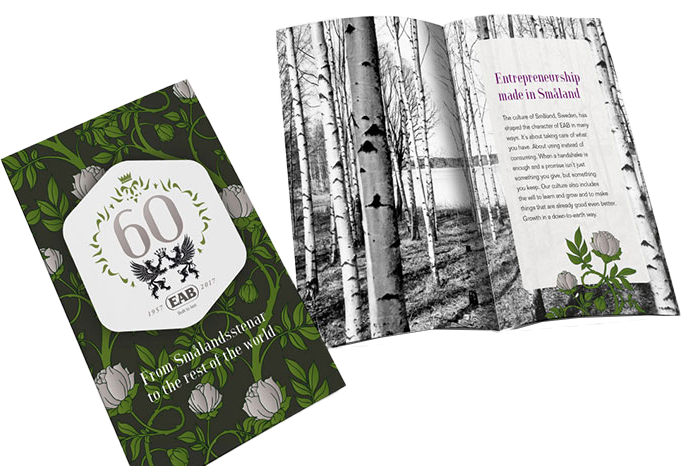 Here you can follow along on a journey with EAB, from 1957 to present.